Intercepted: The Hidden Threat of a Man-in-the-Middle Attack

Cyberatttacks are a constant, ongoing source of concern for all types of businesses. Global cyberattacks increased by 38% in 2022. The increase in the U.S. was even more significant, at 57%. Yet, not all cyberattacks are the same, which means there is no way for businesses to apply a blanket approach to cybersecurity.

As businesses bolster their defenses against attacks, threat actors devise sneaky methods to work around common cybersecurity tools. Social engineering attacks prey on people instead of system vulnerabilities to steal sensitive data or gain access to a business network. A man-in-the-middle attack is one of the most dangerous types of social engineering attacks. While these attacks aren't new, they're notoriously difficult to detect and can allow an attacker to modify data.

A man-in-the-middle (MITM) attack interrupts legitimate communications to eavesdrop, interrupt, or change communications. Depending on the goal, the attacker can intercept browsing activity and redirect victims to malicious websites, capture financial information or login credentials, or alter communications in progress. Some MITM attacks don't even require the attacker to be on a trusted network. They only need a close enough physical proximity.

Man-in-the-middle attacks feature an attacker who uses digital tools to get in between a user device or entity and their intended online destination. The growth of remote work and ever-increasing dependence on IoT devices is likely to provide attackers more opportunities to conduct MITM attacks. So, how can organizations continue to advance without falling victim to these covert attacks? By learning more about them and the tools and methods used to prevent them.

What is a Man-in-the-Middle Attack?

Like the name implies, a man-in-the-middle attack occurs when an attacker places themself between a user and an application. This type of attack may be used to discreetly gather information or to alter the communications of one or both parties. For example, if an attacker could successfully spoof your bank website, they could either use the information you shared to steal your credentials or change your instructions and transfer your funds to another account.

MITM attacks are carried out in two phases: interception and decryption. During the interception phase, the attacker intercepts your online activities before you reach your destination. This could mean redirecting you to a spoofed website or an unencrypted Wi-Fi connection where the attacker can observe all of your browsing activity. The decryption phase occurs when the attacker decodes stolen data and decrypts secure connections to remain undetected.

The goal of a MITM attack is usually to steal personal information like login credentials, account details, and credit card numbers. The information can then be used for identity theft, unapproved fund transfers, or a password change. These activities could have even more significant consequences within a corporate network. 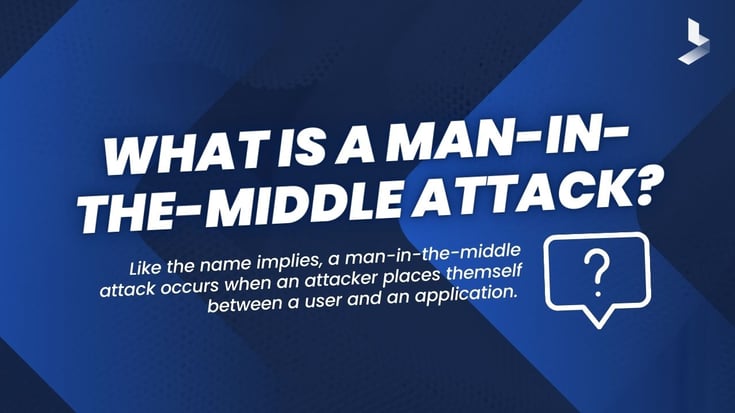 How Man-in-the-Middle Attacks are Carried Out

MITM attacks require an attacker to intercept a user's web traffic. This is typically achieved with the exploitation of public Wi-Fi or through the installation of malware on the user's device. However, there are many techniques used to achieve different objectives.

By now you've probably realized that cybercriminals go to great lengths to carry out MITM attacks. After all, simply being connected to the same network as other devices doesn't provide you with access to the information transmitted from every device in your favorite coffee shop. Attackers use different tools to successfully carry out MITM attacks. Many of these tools are actually designed to improve security, but hackers use them to carry out attacks.

While MITM attacks may be carried out in several different ways, there are two main types of man-in-the-middle attacks.

Consequences of a Man-in-the-Middle Attack

Both consumers and businesses can fall victim to MITM attacks. Since the method can be used in such a wide range of situations, the consequences of these attacks can vary considerably. MITM attacks are often used to intercept sensitive information like usernames, passwords, credit card numbers, and bank account details. When these details are used to target an individual, the victim might be charged for products or services they didn't purchase. When the attack is launched on a business, credential theft through a MITM attack can act as an initial gateway to an advanced persistent threat (APT) that affects multiple points of the business network.

Depending on the goal of the attacker, the consequences of MITM attacks usually fall into one of three categories.

Prevention and Protection Against Man-in-the-Middle Attacks

MITM attacks are different from other social engineering attacks in that they often work to trick the device instead of the user. As a result, the attacks can be more difficult to detect and cause more damage in a short period of time. Yet, by taking preventative action, you can make your online activities less vulnerable to MITM attacks.

If you suspect you're the victim of a MITM attack, it's important to act quickly. By taking quick protective measures, you may be able to halt the attack in progress.

Preventing the Consequences of MITM Attacks with Multi-Layered Security

MITM attacks aren't new. They're not even the easiest form of attack for cybercriminals to carry out. Yet, as long as they provide attackers with access to sensitive data, they're not likely to stop occurring. Increased dependence on IoT devices and the growth of remote work could even result in an increase in these types of attacks as lower levels of security in these devices provide more opportunities for attack.

Man-in-the-middle attacks prey on a user's dependence on their device to follow the right channels and lax security measures. When an attacker manages to position themself in between two parties, they can steal or modify communications in one of the most discreet ways possible. In a business network, the result could be catastrophic.

It's always important to educate yourself and your employees about best practices to avoid cyberattacks. However, MITM attacks can be challenging to detect and can cause extensive damage. A multi-layered approach to security heightens your ability to stop an attack with the ability to detect and stop attacks from different points in the network. Instead of depending on a single indicator of compromise, your system can defend against the many different actions that are likely to indicate a MITM attack. If you're unsure whether your network is vulnerable to MITM attacks, BitLyft can help. Contact us to learn more about these and other social engineering attacks and how you can keep your business network safe.